Places to Visit in Ganagapur

Home >> Places to Visit in Ganagapur

The Main Temple in Ganagapur where Shri Narasimha Saraswati used to stay about 700 years ago is known as Nirgun Math. Shri Narasimha Saraswati was a Paramahamsa Sannyasi of the Dashanami Order established by Shri Adi Shankara Bhagwatpada. As the Saraswati Order of Dasanami Sampradaya belongs to the Sringeri Sharada Peetha, Shri Narasimha Saraswati too belongs to the Sringeri Sampradaya. This is clearly mentioned in the Guru Parampara mentioned in Shri Guru Charitra. Todays Temple is built but literally a Matha of a Sanyasi. This Nirguna Math is adorned with the Nirguna Padukas of Sri Narasimha Saraswati who kept them there while his Avatara Samapti. There is a Holy Tree of Ashwattha in the Temple (Nirgun Math). Shri Kshetra Ganagapur is a Holy Place of Lord Dattatreya and the place is very important.The Importance of Ganagapur Kshetra was explained by Shree Guru himself and it can be seen in "Shree Guru Charitra".

There is an Assurance from Shree Guru that he would forever abide at Ganagapur and go round the village for 'Bhiksha' at 12:00 noon is literally true even today. Offering "Madhukari i.e. Bhisksha (Offering Alms)" to the people at Ganagapur and taking Biksha i.e. Madhukari (Offering Alms) from at least 5 houses is having very importance at this Holy Place. Even today also, the process is continuing and the devotees are having faith that Lord Dattatreya is taking bhiksha every day at Shri Kshetra Ganagapur. Shri Guru Narasimha Saraswati Swamy confirmed the same and it can be seen in Gurucharitra Adhyay (chapter) 21-22.

Sangam Kshetra is a very meeting point where two rivers namely Bheema and Amarja coincides. Sangam is like a Prayag sthana, after taking bath in Sangam and doing pooja to Sangameshwara at Sangameshwara temple is said to be as very auspicious. The importance of Sangam is explained by Shree Guru in Gurucharitra while explaining the importance of Ashtha Teertha's.

Whoever takes bath at Sangam they will be purified from all their sins and get blessings from god. There is temple is Sangam where Shri Narasimha Saraswati swamy has done anushthan and has kept a shivalinga. Which can be seen from morning 3.00 AM to 12.30 PM. This paduka's are made up of stone so it's called as 'Shila Paduka'.

History: Once a Brahmin `Narahari' by name came to Shri Guru at Ganagapur and bowing to him said, `My life is futile. I studied Yajurveda, but as I am suffering from leprosy. All people despise me and do not invite for Karma. I have visited several holy places but the disease is there, kindly bless me.' Shri Guru gave him a dry log of Audumbar and said, `Go to the Sangam and plant it on the bank of Bhima in the east. After bath, worship Ashwattha at the Sangam. Again bathe and give water to this log thrice a day. When it sprouts green foliage, your sins will be wiped off and you will be free from leprosy. As instructed by Shri Guru, Narahari planted the log on the bank of Bhima and began to water it thrice. Shri Guru went to the Sangam to see the leper Brahmin. He was pleased to see his devotion.

The Brahmin was giving water to the log. Shri Guru sprinkled the holy water of his bowl on the log and instantly green foliage sprouted on the log. The leprosy of the Brahmin disappeared and his body became healthy and bright. Narahari bowed to Shreeguru and began to pray him at that time. The 8 sloka stotra composed by Narahari became famous and are being reciting in the temple at night even today also.

Each sloka ends with "VANDAYAAMI NAARASIMHA SARASWATHEESHA PAAHIMAAM". The stotra is now familiar as Narasimha Saraswati ashtaka. Shreeguru blessed Narahari and said, whoever recite the shloka every day with full devotion, they will get Ashta Aishwarya, Spiritual power, wealth, fame and noble offspring. 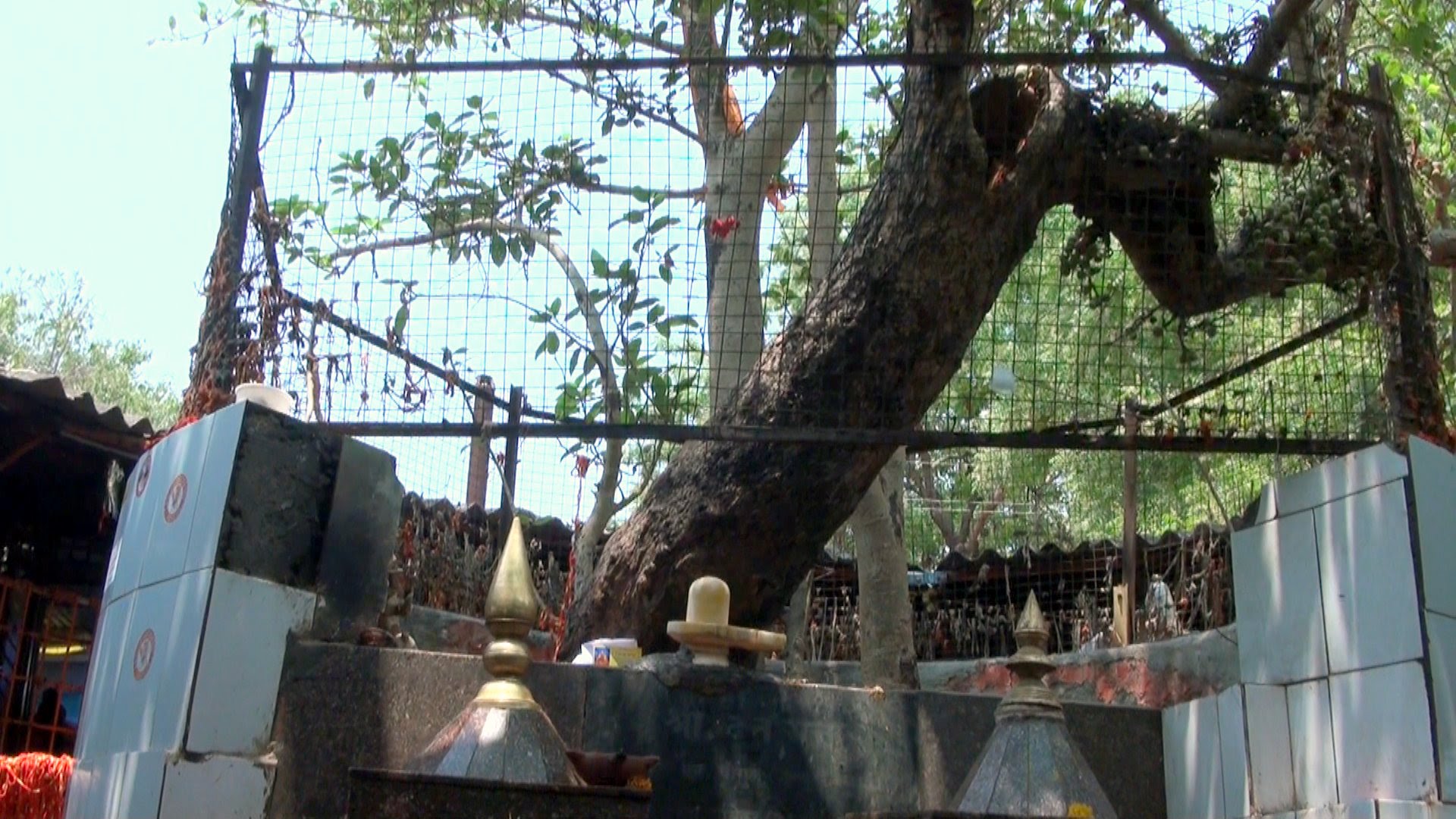 After worshipping Audumbar tree at Sangam, worship Sangameshwara in the Sangameshwaralaya temple with devotion which is exact behind of Swamy Paduka temple in Sangam. This Shivalinga is like Mallikarjuna of Srisailam. Bow to Nandi and Chandi and have 3 rounds like round from Nandi to Chandi and Chandi to Nandi back and have darshan of Lord Shankara.

Ash hill is nearer to Sangam and it is said that there was a hill from which Ash came from the days of Lord Parashurama. Lord Parashurama performed penance at this place. The ash is very powerful and now it is in the form of Mud only. The wearing of ash by mixing with udhi is very powerful and it will protect those persons from DRISHTI doshas. If the ash is applied slightly every day on the stomach part of pregnant ladies, then they will deliver a healthy child with some "Tejarupa".

Everyone who visit Ganagapur will carry some amount of Bhasma with them as it's very powerful and precious. Taste the Bhasma once and you will feel how sweet and how different the Bhasma is.

Meaning: Knowingly or unknowingly, Sins have happened numerously. Once you put Bhasma on your body or forehead, you will become punyatma and get relief from all sins you have made.

Meaning: You have taken 1000 births before, can take 1000 births in future too. Once you wear this bhasma on your body parts, your all 42 generations will be made free from all sins and dosha's.

There was lived a 60 Year old Women Called Gangabai who used to come to Shri Guru and bow to him devotedly every day without missing even a single day. Shri Guru being pleased, one day asked her, what are your desires? God will fulfill your desire. She said, `Swami, a woman's life is futile without a child. Without a son the home is like a forest. Futile persons go to hell. Please give me a boon so that I will have a son at least in next life.' Shri Guru smiled and said, `Service to the Ashwattha tree and you will not be futile. There is an Ashwattha tree at the Bhima Amarja sangam. I am present there after the bath in the river. Therefore worship the Ashwattha tree with full devotedly. The greatness of Ashwattha is narrated in the Puranas. Brahmadev is at its root, Vishnu is in its middle portion and the Rudra is on its top and the Agni (fire god) lies in the interior of the tree. In the months of Ashadha, Paushya or Chaitra, when Guru and Shukra are not set, when the moon is favorable on an auspicious day, observe and do fast and start worshipping the Ashwattha. Do not touch the tree on Sunday, Sankranti and in the evening. The floor at the root should be smeared by cow dung and have Rangoli designs in front of Ashwattha. Worship the Ashwattha thinking it as a Trimurti, with 16 upchars, then saying Purushsukta and observing `moun vratam' take rounds of the tree. Two lakhs rounds to Ashwattha will destroy even the sin of Brahmahatya.

The Ashwattha gives four purusharthas. He also fulfills the desire of a son. Recitation of Mrutyunjaya sitting at the Ashwattha on Saturday avoids accidental death and gives long life. One gets credit of feeding several Brahmins, if one Brahmin is fed under this tree. If one Ashwattha tree is grown, 42 generations are liberated; but if one Ashwattha is cut, it is a great sin performed. Home performed under the tree gives credit of a great sacrifice. Do Homa of one tenth of the number of rounds and feed Brahmins and give golden Ashwattha in charity.

She started worshipping Ashwattha as advised by Shri Guru. On the third day, she had a dream. A Brahmin told her to go to Shri Guru at Ganagapur, have seven rounds of Shri Guru and take the prasad that is given to her and that her desire will be fulfilled. She awoke. On the fourth day she went to Shri Guru and had 7 rounds. Shri Guru gave her 2 fruits and said, `Eat these fruits. Your desire will be fulfilled.' She then completed her vrata of the worship of Ashwattha, after 9 months she begot a daughter. Later on she had a son who became learned and won fame.

The importance of bath in these Ashta teerthas is given in Shreegurucharitra. Some devotees are take bath everyday during their stay at Ganagapur and some are take atleast one time bath during their yatra period. Bath in Ashtateerthas in Poornima, Amaavasya, Karthika, Makara Sankramana, Naraka Chathurdashi days is very powerful.

Kalleshwaralaya is nearer to Manmatha teertha i.e., one of the Ashta theerthas. The importance of Kalleshwar temple was also explained in Shree Guru charitra. Have darshan of this Shiv lingam It is equal to having darshan of 12 Jyothir lingas and taking darshan here is equal as taking darshan at Gokarna Mahabaleshwara. This temple is of lord Kalleshwar which is pretty famous in Ganagapur. It is very much ancient than Nirgun math (Dattatreya temple) as this was the entrance when Shree Narasimha Saraswathi entered Ganagpur first it was the Grama Devatha at that time.

There is also few temples in the same premises such as Swayambhu Shani Devata temple which almost 700 years old which is Swayambhu, Panchamukhi Ganapati temple, Hanuman temple, Navagruha temple and even Godess Durga temple also. This temple is very cool and calm and environment of this temple very pleasant and devotees who visit Ganagapur will make time to visit this temple also at large number.

Vishranti Katta is the Place on the way to Sangam from Ganagapur. It is the place where Shree Guru used to Relax while going to Sangam and while returning. This is in the Farm of the Farmer to whom Shri Guru blesses with Huge Yield of Crops even in the Scarcity and the same can be seen in Chapter 48 of Shri Guru Charitra.

This is the Place where the Young women Savitri (From Mahur) found her Husband Datta dead and started weeping. Later Shri Guru Revives his Life when the women visits Sangam for the Darshan of Shree Guru. The Story can be seen in the Guru Charitra (Please refer Chap No 30). This place is exact opposite of Chidanand Dharmashala, people of Ganagapur will guide you to reach this place if you enquired. It's just 5 mins walkable distance from Nirgun Math (Dattatreya Tem

The idol of Chinthamani Ganapathy can be seen in the inner side of Swamy Mutt. Shree guru gave instructions to disciples to have darshan of this Ganapathi in Ganagapur. Most of the people forget to take darshan of this idol. Once you enter the main devasthan for Pooja you will find it right side of yours and while doing suvarna Paduka pooja it will be there exact behind you. Importance of this Ganapati is, Shree Narasimha Saraswathy has done pratishthapana by just keeping only a handful of soil. From past 700 years it's growing and it has reached height up to almost 1.5 feet till now.

These temples are beside the Chakra Teerth and are very near to the Nirgun Math & can be reached by walk.

This is the Temple where Tantuk, a Weaver to whom Shree Guru took to Srisailam on Maha Shivratri within some Moments (In Adhyay 44), used to Worship Lord Shiva. This Place is in front area of the Nirgun Math and can easily be visited.

You have Temple of Lord Hanuman at the Agasi (Starting Pt Of the Village) of the Village and besides this temple you have Grama Devata. There are also Temples of Maha Laxmi nearby Nirgun Math and Shri Shirdi Sai Baba Mandir on way to Sangam.